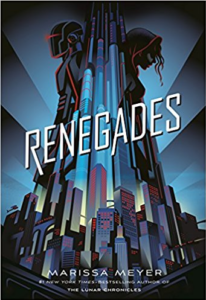 Nightmare is a villain. A villain with principles and a lot of heart. But that won’t stop her from getting her revenge on the superheroes of Gatlin City.

Renegades by Marissa Meyer is the story of a city governed by superheroes called Renegades. Superheroes, though, aren’t always there to help. At least, they weren’t there when Nova’s family was murdered. Her uncle was, though–her uncle, Ace Anarchy, the most wanted villain in town. And he made her into the Nightmare she has become.

On the other side, Adrian was born to the Renegades. Old enough himself to become a superhero now, his only goal is to uphold justice. But what happens when he decides to try and become that superhero, and things don’t go exactly according to plan? And what happens when he meets Nova, a quick-thinking girl who seems to find trouble, even after she joins the Renegades?

This is an action-packed, smart story from a fantastic author, and you won’t be able to put it down. And the ending is guaranteed to drive you crazy until the sequel comes out in November.