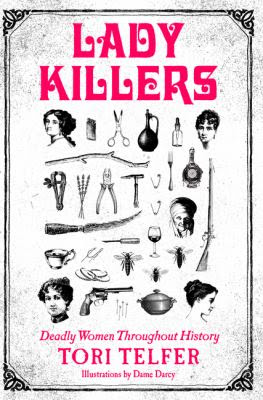 Summary: Inspired by author Tori Telfer’s Jezebel column “Lady Killers,” this thrilling and entertaining compendium investigates female serial killers and their crimes through the ages.
When you think of serial killers throughout history, the names that come to mind are ones like Jack the Ripper, John Wayne Gacy, and Ted Bundy. But what about Tillie Klimek, Moulay Hassan, Kate Bender? The narrative we’re comfortable with is the one where women are the victims of violent crime, not the perpetrators. In fact, serial killers are thought to be so universally, overwhelmingly male that in 1998, FBI profiler Roy Hazelwood infamously declared in a homicide conference, “There are no female serial killers.”
Lady Killers, based on the popular online series that appeared on Jezebel and The Hairpin, disputes that claim and offers fourteen gruesome examples as evidence. Though largely forgotten by history, female serial killers such as Erzsébet Báthory, Nannie Doss, Mary Ann Cotton, and Darya Nikolayevna Saltykova rival their male counterparts in cunning, cruelty, and appetite for destruction.
Each chapter explores the crimes and history of a different subject, and then proceeds to unpack her legacy and her portrayal in the media, as well as the stereotypes and sexist clichés that inevitably surround her. The first book to examine female serial killers through a feminist lens with a witty and dryly humorous tone, Lady Killersdismisses easy explanations (she was hormonal, she did it for love, a man made her do it) and tired tropes (she was a femme fatale, a black widow, a witch), delving into the complex reality of female aggression and predation. Featuring 14 illustrations from Dame Darcy, Lady Killers is a bloodcurdling, insightful, and irresistible journey into the heart of darkness.
Angie’s comments: Each chapter is relatively short and focuses on an individual person. The tone is humorous and serious at turns, and author Telfor is adept at knowing when to have fun and when to be serious. The author did a fantastic job of researching and summarizing her research in an enjoyable (and frightening) way. The role of women and the culture of each woman’s time is described, giving context to the events.
Recommended for readers of true crime and those interested in feminism.