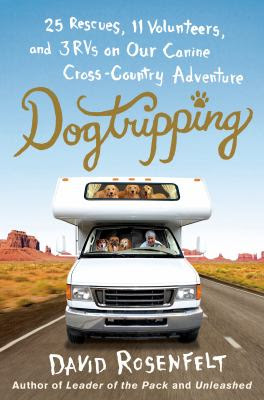 Dogtripping: 25 Rescues, 11 Volunteers, and 3 RVs on Our Canine Cross-Country Adventure by David Rosenfelt

Summary: David Rosenfelt’s “Dogtripping” is moving and funny account of a cross-country move from California to Maine, and the beginnings of a dog rescue foundation
When mystery writer David Rosenfelt and his family moved from Southern California to Maine, he thought he had prepared for everything. They had mapped the route, brought three GPSs for backup, as well as refrigerators full of food, and stoves and microwaves on which to cook them. But traveling with twenty-five dogs turned out to be a bigger ordeal than he anticipated, despite the RVs, the extra kibble, volunteers (including a few readers), and camping equipment. Rosenfelt recounts the adventure of moving his animal companions across the United States with humor and warmth, and tells the tale of how he and his wife became passionate foster parents for rescue dogs, culminating in the creation of the Tara Foundation and successfully placing several thousand dogs with loving families.

Reader’s comments: This book was a fun, quick read. One minute I was crying, the next I was laughing. The chapters switch between stories of how David and his wife Debbie started a rescue group, the many dogs that have come in and out of their lives over the years, and their cross-country adventures with 25 dogs, moving from California to Maine. He describes heartwarming rescues and heartbreaking losses that they have endured, and mixes in the humorous daily realities of pet ownership. If you are a lover of animals, especially dogs, you will enjoy this book.