The Disappearance of Sloane Sullivan

09 Jul The Disappearance of Sloane Sullivan 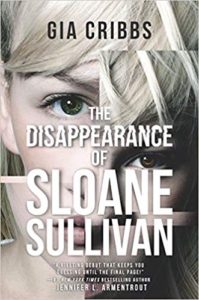 The Disappearance of Sloane Sullivan by Gia Cribbs

People think that they know Sloane Sullivan, but they only see what she wants them to see. They can never really know Sloane Sullivan–because Sloane Sullivan isn’t real. She’s been known by nineteen other names since she saw something she shouldn’t have, and now on the run with a U. S. Marshall as her only companion. Mark has always been there for her. He not only protects her, but teaches her to protect herself. Sloane has one goal: to make it to her eighteenth birthday so that she can leave witness protection and stop running. Hoping this will be their last move, she settles into her new school, ready to blend in…until she runs into someone from her past.

There are two rules in witness protection: if you think you’ve seen someone from the past, we run; if someone gets suspicious, we run. But when she finds out that her best friend from her old life is going to her new school, will the rules still apply? Now she has to choose, will she tell Mark about Jason and run, or will she risk everything to have a second chance with the boy she loved?

But things aren’t always as they seem. Jason isn’t the only part of her past catching up with her. She’ll discover long kept secrets that will change her life, and she’ll have to choose one last time who she wants to be…and who she wants to be with.