Booke of the Hidden

08 May Booke of the Hidden

Posted at 10:57h in Uncategorized by Kendra Hummel
0 Likes
Share 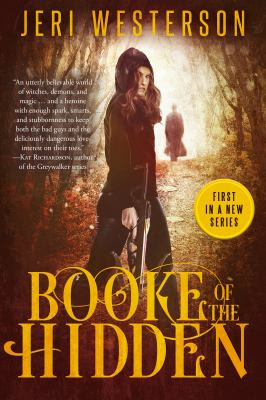 Booke of the Hidden by Jeri Westerson

Summary: To get a fresh start away from a bad relationship, Kylie Strange moves across the country to open a shop in a seemingly quiet town in rural Maine. During renovations on Strange Herbs & Teas, she discovers a peculiar and ancient codex, The Booke of the Hidden, bricked into the wall. Every small town has its legends and unusual histories, and this artifact sends Kylie right into the center of Moody Bog’s biggest secret.

While puzzling over the tome’s oddly blank pages, Kylie gets an unexpected visitor―Erasmus Dark, an inscrutable stranger who claims to be a demon, knows she has the book, and warns her that she has opened a portal to the netherworld. Kylie brushes off this nonsense, until a series of bizarre murders put her, the newcomer, at the center. With the help of the demon and a coven of witches she befriends while dodging the handsome but sharp-eyed sheriff, Kylie hunts for a killer―that might not be human.

Angie’s comments: This is an interesting, odd book that includes a mix of humor, Wicca, demons, romance, urban fantasy, and mystery. Kylie is relatable, and the characters each bring an interesting element to the story. It is a fun ride. The romance does get graphic at times. The book is also the first in a series, so be prepared for un-concluded ending.
Recommended for readers who like urban fantasy and/or zany characters.