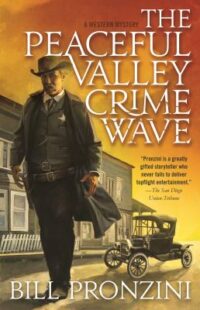 Posted at 16:00h in Uncategorized by Kendra Hummel
0 Likes
Share

Nothing much happens in Peaceful Valley, Montana. And that’s just how Sheriff Lucas Monk likes it.

Aside from the occasional drunken brawl or minor disturbance out on the reservation, he hasn’t had to resort to his fists or sidearm in years.

That is, until mid-October, 1914, when the theft of a wooden cigar store Indian sets off a crime wave like nothing Lucas has ever seen. Teenager Charity Axthelm goes missing, Reba Purvis’s housekeeper is poisoned with cyanide Reba is sure was meant for her, and Lucas’s gut tells him that this is only the beginning.

It’s not long before the first corpse shows up, bringing the peace in the valley to a thundering end.

Angie’s comments: A relatively short read, this is an entertaining historical cozyish Western mystery. Not as cozy as some cozy mysteries, but still in the same line. I thoroughly enjoyed visiting Peaceful Valley with its Western flavor.

Recommended for readers of historical cozies or Westerns.